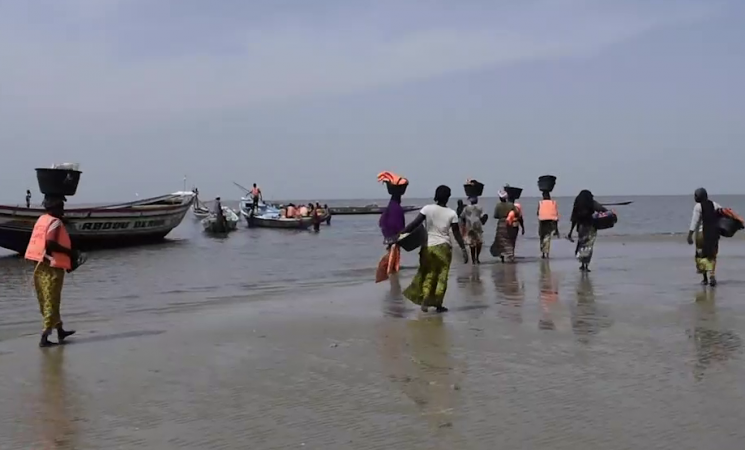 As people around the world recognised and celebrated World Environment Day 2021 we wondered why efforts to address the climate crisis are not yielding any major victories. We believe that the missing link in ongoing climate actions is the non-recognition that climate change is a social issue. Climate action must be linked to the social justice struggle and center those who consistently remains invisible in the world. This is why, we strongly prescribe feminist climate justice approaches to address this crisis.

The climate chaos is getting worse with its effects disproportionately felt by those least responsible. Industrialised countries and their multinational corporations who are responsible for 79 percent of historical carbon emissions are the least active in dealing with it. Instead, they justify their inaction with arguments that reducing their emissions as required under the Kyoto Protocol will put their economies at a competitive disadvantage.

Despite the projections of the UNEP Emission gaps report of 2019 that to stay below 1.5 degrees developed countries would, for instance, have to collectively reduce their domestic greenhouse gas emissions by at least 65 percent by 2030 compared to levels in 1990 as the bare minimum, the EU was reported to have drafted a deal in 2020 that pushed their target to 55 percent net emission reduction target by 2030. However, reporters have argued that “Net” in climate policy means not only foreseeing actual emissions reduction but also planning on forests, croplands, wetlands to act as carbon sinks and absorb some of these emissions, which means the actual reduction target is lower and closer to 52.8 percent.

They are also discreetly pushing to avoid actual emissions reductions with proposals to offset their emissions through so-called "nature-based solutions" that they claim would draw down carbon from the atmosphere. In a reversal of roles and responsibilities, the perpetrators are putting forward condescending demands that the global South, especially Africa, should allow trees to be planted on huge areas of lands to create carbon sinks. The trees they encourage are mainly eucalyptus and pine, which are now referred to as thirsty trees that are systematically affecting biodiversity and causing a dwindling of natural water resources. This situation has placed a major burden on communities, and especially on women given their primary role in the care work.

The proponents of such "nature-based solutions" are also the same players behind the massive deforestation of Africa’s vast grasslands and rich savannah biomes (which are ancient and much older than human societies) to pave the way for their extractive projects. Now, they are looking to grab large areas of Africa's lands and even displacing small producers for massive tree plantation projects, which will make money for the foreign companies operating the plantations and earn them carbon credits so that they can continue to burn fossil fuels. For example, after almost 10 years of investment in and expansion of eucalyptus and pine tree plantations, Mozambique continues to face direct and indirect largescale deforestation of native forests. In South Africa, this tree planting project is responsible for the loss of 231 million liters of water per year. For women who depend on natural forests for medicinal plants like the bark of the ‘Mbako’  tree in Cameroon to treat malaria, and also source protein-rich insects like caterpillars, the consequences will be devastating.

The reality is that the impact of developed countries’ fulfillment of their current commitment to reducing emissions is still doubtful. It is even more doubtful when we take into consideration the emissions resulting from the extractive companies their corporations operate abroad, such as mines, fishing trawlers, large scale industrial plantations, or oil and gas wells. Today’s climate actions should not be a race to the bottom, but rather, a race to save what we still have. It is essential that industrialised countries take responsibility for the emissions their companies generate abroad and take actions to drastically reduce them. They should adopt extra territorial obligations to force their companies operating abroad to reduce greenhouse gas emissions from their operations and to stop land clearing, deforestation and environmental pollution.

Neoliberalism, pushed into Africa through trade and investment agreements like the Structural Adjustment Programmes, Bilateral Investment Treaties and the Energy Charter Treaty is the main blockage to achieving just climate action on the continent. This is because they limit the kind of climate and environmental regulatory measures that governments can implement without paying huge amounts in compensation (described as "indirect expropriation”). If governments do go ahead with such actions, companies can use the Investor – State Dispute Settlement (ISDS) mechanisms embedded in the treaties to sue the governments for the loss of current or future profits. For example, the Energy Charter Treaty is currently being used by big oil, gas, and coal companies to discourage governments from transitioning to clean energy through challenging oil drilling bans, the rejection of pipelines, taxes on fossil fuels, and moratoria on and phase-outs of controversial types of energy.

Neoliberalism has thus created a policy vacuum leaving corporate power unaccountable. Its trademark policies of privatisation, deregulation, investment liberalisation, and free trade deals liberate corporations to solely focus on profit maximisation while treating the atmosphere like a sewage dump. In the absence of the necessary regulation to deal with the looming climate crisis, communities are getting sugarcoated acts of Corporate Social Responsibility, such as village boreholes or poorly equipped health clinics, that are voluntary and allow corporations to market themselves as "green" even as they go on polluting. Ultimately, it has constrained African states from effectively promoting public interests and social welfare, further marginalising those already facing the brunt of a polluted atmosphere and the climate crisis.

It is important that nationally, regionally and globally, states, communities and individuals adopt feminist approaches in climate action. Feminism is based on egalitarianism and rejects neoliberalism as a corrupt and abusive system that has singly facilitated the climate crisis. Feminism prioritises the interests of those most marginalised within communities and the protection of the environment, and centers the needs of such individuals, especially women, in decision making processes. Neoliberalism prioritises competitive self-interest and hyper-individualism while stigmatising compassion and solidarity, and fraying indigenous communities’ collective bonds.

In the African context, the feminist approach to climate justice centers the lived experiences of indigenous African women and other minoritised communities in the analysis of the causes and effects of climate change. It recognises that climate change disproportionately affects these marginalised groups which already face other forms of discrimination based on their gender, socioeconomic class, race, ethnicity, nationality, ability, sexual orientation, and age. It is their lived experiences that then inform climate action strategies and responses that are just, fair and inclusive.

The feminist approach to climate justice therefore demands that governments, civil society, private sector, environmentalists should adopt an intersectional approach and address the causes and effects of climate change, not as a single issue, but in recognition of the full spectrum of the numerous challenges that communities face. For women specifically, as the primary caretakers, and as individuals who have to hold the fort of care work, food security, access to energy resources, and shouldering other adverse effects of climate change, the feminist approach is imperative. Their close relationship and dependence on the environment is based on their understanding that life and livelihood is dependent upon the nurturing and caring of the earth on which everyone lives.

Finally, it recommends that climate actions must be grounded in the ideals of social justice and collective public responses, while centering the needs of those most marginalised in society. If we want to bring down emissions fast and realise a just climate transition, we must confront neoliberalism and its insidious anti-social toxin as preached by Margaret Thatcher that “there is no such thing as society.” This will require addressing underlying structural power relations and socio-economic marginalisation promulgated by patriarchy and capitalism against poor communities, especially, women; and promote the adoption and utilisation of innovative local solutions and indigenous knowledge.

Previous article CONFERENCE: "The search for a New Economic Dispensation in Uganda" - Thursday | 12.08.2021