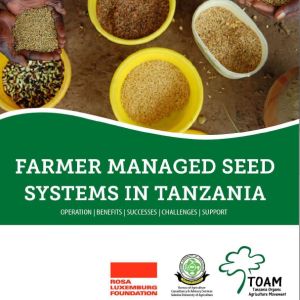 Farmers prefer Farmers-Managed Seed Systems - this is one conclusion of a recently published report commissioned by Tanzania Organic Agriculture Movement.  The study has revealed that the majority of farmers in eight agricultural zones surveyed prefer using the Farmer Managed Seed System (FMSS) over the formal / commercial system.
The first indicator is farmers’ preference of seeds from their FMSS. Almost 99 percent of paddy acres, over 93 percent of groundnut acres, about 93 percent of bean acres and about 68 percent of all other crops cultivated were sown with seed from FMSS, the study notes. This is because formal seeds for most of the crops cultivated in all agro-ecological zones, with the exceptions of maize and vegetables, are not readily available. Also, even for crops with seed from formal sources, their availability, reliability, and quality remain uncertain.
Other factors behind the farmers’ preference of FMSS include ease of access, both in terms of availability and affordability compared to the commercial seeds. Their preference is high albeit some challenges including difficulties in getting seed when crop fail and pests and diseases that destroy seeds especially during storage.
Provision of farm-level training, improvement of extension services and reviving the production of quality declared seeds (QDS) are some of the recommendations made by the study

Here you will find publications published by