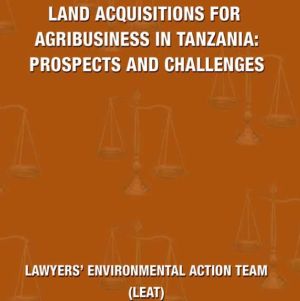 Lack of a clear guiding policy for regulating the development of biofuel plantations has led to the rapid increase in biofuel plantations in Tanzania. The increase in these plantations has resulted in infringement of land rights and forest loss and has impacted negatively on the indigenous people’s livelihoods. It is against this background that LEAT decided to assess land acquisition for agribusiness in some parts of Tanzania and its socio-economic impact on the communities, focusing largely on issues relating to gender. This report, therefore, is based on the study commissioned by LEAT. The study was conducted in four regions in Tanzania, notably, Kigoma, Iringa, Lindi and Coast regions, between May and June 2011.

The overall objective of the study was to map the land that has been grabbed and document the socio-economic impact of land grabbing on the local communities in Tanzania. In order to achieve this objective, LEAT commissioned two consultants with extensive experience in legal and socio-economic issues relating to natural and environmental resources use and management in Tanzania to undertake the study. The study used qualitative methods of data collection, namely in-depth interviews and focus group discussions. Various village and district stakeholders were involved in the discussions and the interviews. Additionally, relevant documents were reviewed to complement the data in this report.

Next article Study: The Ironies of Big Development Projects in Uganda