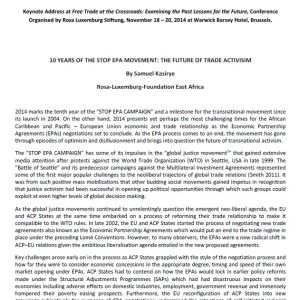 2014 marks the tenth year of the “STOP EPA CAMPAIGN” and a milestone for the transnational movement since its launch in 2004. On the other hand, 2014 presents yet perhaps the most challenging times for the African Caribbean and Pacific – European Union economic and trade relationship as the Economic Partnership Agreements (EPAs) negotiations set to conclude. As the EPA process comes to an end, the movement has gone through episodes of optimism and disillusionment and brings into question the future of transnational activism.

Keynote Address at the conference "Free Trade at the Crossroads: Examining the Past Lessons for the Future", organised by Rosa Luxemburg Stiftung, November 18 – 20, 2014 at Warwick Barsey Hotel, Brussels.