Paper: Power to the people 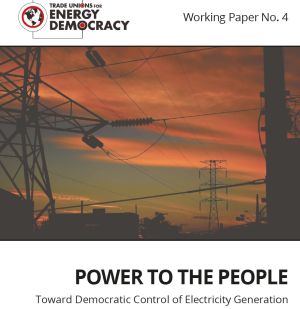 In the last years, “energy democracy” has become a part of the international trade union discourse on energy and climate change. A growing number of unions and regional bodies, like the Trade Union Confederation of the Americas, are calling for democratic control over energy, a “reclaiming” of the energy sector to the public sphere, and a just transition to a renewables-based, low-carbon economy.

Power to the People: Toward Democratic Control of Electricity Generation starts by examining the historical experience of the “public works” approach to energy transition during the New Deal in the United States and, in particular, the Rural Electrification Administration—a model of state-cooperative interaction and partnership replicated successfully in numerous countries during the post-World War II period. The working paper then aims to flesh out the actual and potential content behind the term energy democracy in order to help unions get a better grasp of what is happening now and what could happen in the future. It discusses the major “fronts” on which the struggle for democratic control of power generation is currently expressing itself: cooperatives in the renewable energy sector and their potential contribution to energy democracy, as well as recent attempts to reclaim electrical power generation at the municipal level.

Unions and social movements have the power to help create a new energy system, one that will be located at the heart of a new political economy grounded in equity, true sustainability, and economic democracy. This paper, co-authored by Sean Sweeney, Kylie Benton-Connell, and Lara Skinner, will explore concrete possibilities for moving toward this goal. And make no mistake: unions will need to take part, if not take the lead, in this struggle for economic and environmental justice.