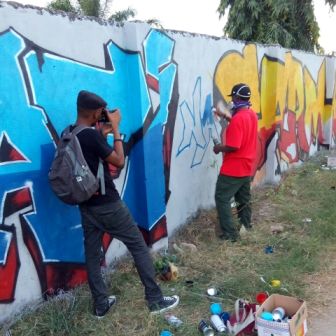 On Saturday 13th June 2015, the NAFASI ART SPACE held, a hip-hop and graffiti fête, the first of a series of activities to kick start their new democracy consciousness project themed Jitokeze (Step Up) in Dar es Salaam. The project supported by the Rosa Luxemburg Stiftung and other partners aims at increasing public awareness and participation in democratic processes and for citizens to actively partake in the forthcoming general election in Tanzania due in October 2015.

The fête attracted over 2000 Dar es Salaam residents who enjoyed acts from influential hip-hop and graffiti artists laced with messages of voter registration, election participation and peace. One of the revelers present remarked that combining the arts with positive political messages was an innovative way of promoting coexistence. Other actions for the project will comprise development of election messages, including interviews with communities from diverse social groups in the various quarters that make up Dar es Salaam. The project will also create an additional 19 Graffiti murals around Dar es Salaam, develop educational posters and spread out daily messages through print and social media channels like YouTube, Facebook, Twitter, and Instagram to have a multiplier effect.