Webinar on AfCFTA STATE OF PLAY: READINESS AND PITFALLS OF IMPLEMENTATION - Thursday | 25.3.2021 | 10am CET 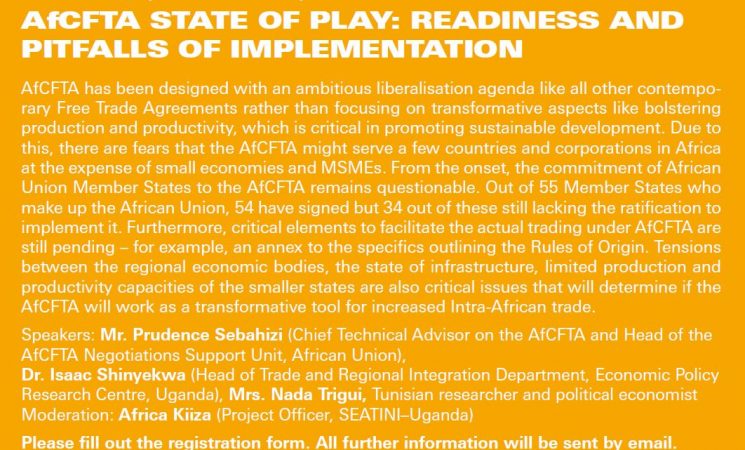 AfCFTA STATE OF PLAY: READINESS AND PITFALLS OF IMPLEMENTATION

AfCFTA has been designed with an ambitious liberalization agenda like all other contemporary Free Trade Agreements rather than focusing on transformative aspects like bolstering production and productivity, which is critical in promoting sustainable development. Due to this, there are fears that the AfCFTA might serve a few countries and corporations in Africa at the expense of small economies and MSMEs. From the onset, the commitment of African Union Member States to the AfCFTA remains questionable. Out of 55 Member States who make up the African Union, 54 have signed but 34 out of these still lacking the ratification to implement it. Furthermore, critical elements to facilitate the actual trading under AfCFTA are still pending – for example, an annex to the specifics outlining the Rules of Origin. Tensions between the regional economic bodies, the state of infrastructure, limited production and productivity capacities of the smaller states are also critical issues that will determine if the AfCFTA will work as a transformative tool for increased Intra-African trade.

Trading under the African Continental Free Trade Area (AfCFTA) started from 1st January 2021 onwards in the context of the evolving African and global policy landscape, including the development challenges – highlighted by the COVID-19 pandemic and the responses to it. While the AfCFTA spirit of integration is creditable, the initiative has not started without challenges. Even at its foundations, the AfCFTA still faces a number of ideological, political and economic hurdles, which are likely to derail the ambition of the Africa Vison 2063.

These range from the commitment of African Union Member States to the AfCFTA, to unresolved trade tensions between the regional economic blocs and diplomatic difficulties. It is also worth to note that there are a number of interconnected issues to the AfCFTA, which require focus. Such issues range from understanding the political economy of financing the AfCFTA; implementation of AfCFTA in the context of agendas like the Post Cotonou, Economic Partnership Agreements, Compact with Africa. Trading under the AfCFTA will also have implications on various critical topical subjects like agriculture, climate, migration and labour. Whether this is a result of variable geometry or putting national interests first, an AfCFTA that has commenced with «cherry-picking» by Member States reveals various underlying challenges.

These conversations aim to offer some insights and thoughts towards the areas yet to be negotiated under the AfCFTA that could contribute to addressing Africa’s maldevelopment as well as issues with implementing the protocols already concluded. The Rosa Luxemburg Stiftung in collaboration with SEATINI is organizing a series of webinars throughout the year to explore these interconnected issues and generate positions which will be critical in facilitating stakeholder’s engagement in AfCFTA negotiations.

A series of events organized by offices of the Rosa-Luxemburg-Stiftung in Dar es Salaam, Dakar, Tunis and Brussels and SEATINI.