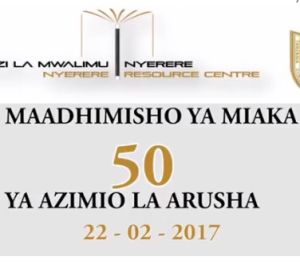 In 1967, six years after independence, the then Tanzania Mainland’s ruling part (the Tanganyika Africa National Union – TANU) passed a declaration, the Arusha Declaration on Socialism and Self-Reliance. Its implementation would go on to see massive establishment of “Socialist Villages” and Nationalization of private properties and means of production just to mention a few. It would later, de facto, be abandoned in the late 1980, amid so much economic hardships and pressures from the Bretton Woods Institutions.

Fast forward 50 years, in February 2017, the Nyerere Resource Center (NRC), a partner organization of RLS in East Africa, organized a high level event to mark the 50 years since the declaration. In part of the commemoration, NRC compiled brief video documentaries (mostly in Kiswahili) to capture some of the key moments during the commemoration and about the Declaration itself.

For more information on the event and the Arusha Declaration in general, contact the Nyerere Resource Center through: kavazi.nrc@gmail.com

The First Documentary MAKALA MAALUM YA MIAKA 50 YA AZIMIO LA ARUSHA tells the story of the event: why it was organized, who were behind the event and what it means to the Tanzanian society now.

The Third Video UJAMAA WA MWALIMU: UMEZIMULIWA AU UMETEKETEZWA? capture Prof. Ahmed Mohiddin’s submission on the Arusha Declaration and what it meant back then and now;