Film: Sinema Ujamaa - Tracing the history of film in Tanzania 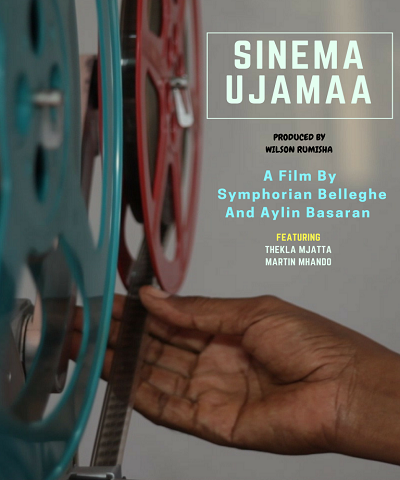 Sinema Ujamaa is a documentary that reveals the history of film in Tanzania, reminding the viewer that attempts to establish a Tanzanian film industry didn’t start with the ‘Bongo Movies’ of the early 2000s, but dates back to the 1960s, when Tanzania had just gotten its independence and continued throughout its years of Ujamaa (Tanzanian socialism).

A crew of young Tanzanian film professionals and veterans of the early Tanzanian film industry, trace back what film making meant when cameras were heavy, film was on reels, had to be cut with scissors and footage had to be developed abroad.

Sinema Ujamaa is about remembrance and re-discovery. By once more handling old 35 mm cameras and operating an editing table, former film makers recall Tanzania’s history through the frame of its film productions. The documentary uses historical footage, but as some films are only poorly preserved, scenes are re-enacted once more by the former actors, who by doing so reflect their meaning and messages.

During their journey they revisit places where the first Tanzanian film classics such as Yombayomba were shot. They talk to villagers of Isansa (close to Mbeya in South-Western Tanzania) which was once elected the best Ujamaa village of the whole country and where major scenes were shot about leadership, communal organization and solidarity. By facing the changes that have occurred on location, they dig into the changes and challenges society has been facing since the dawn of Ujamaa. To bring the icon of early Tanzanian film back to life, the son of the late Tanzanian cinema star Raymond Fundi slips in his father’s role who used to play Yombayomba, the peasant who came to town to make a life but as he fails eventually finds a new living in an Ujamaa village. The fame the character once had still endures, which becomes evident when during the shooting, people on the streets of Kariakoo criticize the protagonist’s costume, which is not as torn as the one of the original.

The early rise of film in independent Tanzania came through the use of news reels as a means to create unity in a widely scattered new nation. Journeys and speeches of the first president Julius Nyerere together with events in different regions were captured in the Habari za Tanzania (News From Tanzania) series and distributed throughout the country through cinema vans and in urban cinema halls in order to create a connection between remote villages and the new government in Dar es Salaam. Besides the popular medium radio, films were used to give the new nation an audio-visual face. Sinema Ujamaa captures this period through archival footage and the memories of cameramen who accompanied president Nyerere to international meetings such as the Organization of African Union (OAU). The excitement film makers experienced during those trips represents the atmosphere of departure that the young nation went through. The history of Tanzanian fiction film started in the 1970s. While films such as Fimbo ya Mnyonge and Yombayomba dealt with the promotion and critical revision of Ujamaa, developing original forms of socialist realism, subjects were more divers from the 1980s onwards. International co-productions such as Harusi ya Mariamu and Mama Tumaini depict notions of tradition and modernity in the realms of medicine and traditional beliefs, corruption and the co-existence and relationship of Tanzanians and foreign ‘experts’. Questions of identity, individual and collective trauma related to Africa’s history of slavery and colonialism and its link to the Afro-American diaspora are negotiated in Maangamizi, The Ancient One, the last and most internationally recognized production of Tanzania Film Company in the 1990s.

Moreover, women start to take over crucial parts in the stories and take over the lead roles. Actress Thecla Mjatta, who had her first appearances in films of the 1980s and is still well known in recent Bongo Movies, slips back into various roles she used to play 20 or 30 years ago. Martin Mhando, who has made his career from the Tanzania Film Company to the Director of the Zanzibar International Film Festival (ZIFF) slips back into his role as director when he instructs the son of Yombayomba-actor Raymond Fundi, who joins to trace back his late father’s work. From former Ujamaa villages, the film moves on into a recent day Bongo Movie store, where a former film maker of Tanzania Film Company and a young film professional meet and discuss what it means to create a national film industry – now and then. Through its encounters, Sinema Ujamaa discusses film’s crucial role for society, as a critical medium to discuss development, community and inter-personal relationships and more general questions on how Tanzanians want to live together.

Sinema Ujamaa is a labor of love and hard work of the research cooperation between Aylin Basaran, an Austria-based scholar and RLS grant holder, working on her PhD and Tanzanian film scholar Symphorian Belleghe who was himself one of the last employees of the Tanzania Film Company that closed down in the 1990s as a result of structural adjustment programs imposed on Tanzania. Through their cinematic re-discovery as well as digitalization of the historical films surrendered to oblivion in the National Film Archive as a result of their research cooperation, the history of Tanzanian film is once again accessible to the public.