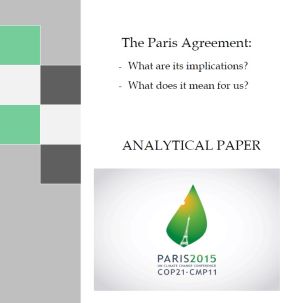 The recently-agreed deal in Paris on Climate Change does not contain much to be celebrated for the Least Developed Countries (LDCs), according to an analysis done by the Civil Society Forum on Climate Change (Forum CC) – a RLS partner in Tanzania.

According to the analysis – which was presented and discussed by multi-stakeholders at a workshop in Dar es Salaam soon after the COP21 in Paris – the agreement fell well short of setting realistic, ambitious targets on mitigating, adaptation and financing of climate change initiatives on one hand and putting of legally binding commitments to achieve the set targets on the other.
One of the main shortfalls of the agreement, from the African point of view, is the failure by the parties to agree on putting priority on the urgent need to finance adaptation in all LDCs. Lack of prioritization and firm commitments to finance adaptation means African countries, and indeed all other LDCs, are set to suffer more from the ever-increasing extreme weather events with very limited technical and financial capacity to adapt.

In general, the agreement may look good on paper, but it brings little hope for change on the ground – especially for communities that are already suffering from climate change and are in need of urgent help.

COP 21: Climate Summit in Paris. Materials of the Rosa Luxemburg Stiftung (in English)

What will the Paris Agreement be remembered for? Analysis by Oxfam