Paper: Kenya - Voting for our own 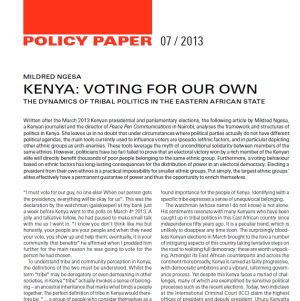 Written after the March 2013 Kenyan presidential and parliamentary elections, the following article by Mildred Ngesa, a Kenyan journalist and the director of Peace Pen Communications in Nairobi, analyses the framework and structures of politics in Kenya. She leaves us in no doubt that under circumstances where political parties actually do not have different political agendas, the main tools currently used to influence voters are (pseudo-)ethnic factors, and in particular depicting other ethnic groups as arch-enemies. These tools leverage the myth of unconditional solidarity between members of the same ethnos. However, politicians have (so far) failed to prove that an electoral victory won by a rich member of the Kenyan elite will directly benefit thousands of poor people belonging to the same ethnic group. Furthermore, a voting behaviour based on ethnic factors has long-lasting consequences for the distribution of power in an electoral democracy. Electing a president from their own ethnos is a practical impossibility for smaller ethnic groups. Put simply, the largest ethnic groups’ elites effectively have a permanent guarantee of power and thus the opportunity to enrich themselves.