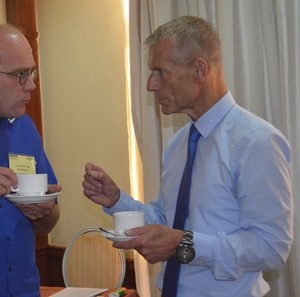 The European Union is seeking to conclude several economic partnerships around the world, one with the East African Community. A conference hosted by the Rosa Luxemburg Foundation recently discussed the pros and cons of Tanzania. The left-wing EU Member of Parliament Helmut Scholz also participated. He spoke to Dorothee Braun, the director of the RLS East Africa office.

Die Linke in the European Parliament keeps a close and critical eye on the negotiations process on the envisaged economic partnerships between the European Union and African countries. What are the main concerns/objections?
We as the leftist generally have feel uneasy in this regard. The EU has been parallel negotiating economic partnership agreements since 2003, with seven regions in Africa, the Caribbean and the Pacific. In these negotiations, however, the different economic, social and social development conditions within the respective region hardly play a role. Besides, the draft treaties do not or only insufficiently consider/take the independent/autonomous development perspectives and the development opportunities of the respective partner countries into account.

What are the EU's objectives?/Which targets does the EU pursue?
The main focus lies on the further liberalisation of trade flows in the interest of the EU. Trade liberalisation and the economic strength of the EU are jeopardizing the necessary own development spurt in the partner countries. In addition, the differences between the more economically advanced and the more economically weak countries within a region are further paved. Stronger countries benefit from trade partnerships but not fragile countries. This weakens, particularly in East Africa, important/essential approaches to regional cooperation.

Sustainable development as a necessary and integral part of any European Trade Agreement has only been partially supported by African partner countries in the past. Do you observe approaches in these regard?
There is movement. The EU has already made concessions in the economic agreements currently under negotiation. But in the case of particular aspects/issues such as environmental and social standard setting processes, on which the EU is setting the pace, the gap between the EU and East African partner countries remains/is still very large. The African partners tend to be sceptical towards a general recognition of the EU standards. That is why we need more joint debates.

What should be at the core in these debates?
The focus should be laid on catching up as well as on independent/autonomous economic development of these countries. However, this requires greater support of the idea/concept of sustainable development, and in particular the enforcement of social-ecological and human rights standards. From the point of view of the left, compliance with human rights standards should be a precondition in any case before ratifying any partnership agreements at all. There is movement, even among the African partner countries, but in general this is not enough.

Could you specify that?
With the positioning of African states regarding responsibilities/duties of and cooperation with the International Criminal Court, such as the recent reversal of commitments made by Nelson Mandela by South African President Jacob Zuma, and the foreshadowed/hinted change in attitude of Burundi in this regard, it becomes clear that there is a new need for communication, and open discussion on disputed questions – in the areas of trade, economy, and also of difficult social development processes, especially within the countries of the region that we are talking about.
There is the need to redefine and jointly develop further the conditions of cooperation with the EU also taking into account the colonial heritage, upon which specific tangible lessons needs to be drawn as to the EU’s responsibility for the present situation in Africa as a whole and in particular in countries such as Kenya, Tanzania, Burundi, Uganda and Rwanda.

Currently, the trade talks between the EU and the East African Community are on hold because Tanzania has had a period of four months' notice to reflect. What is the future of the Left in the European Parliament against this background?
The EU Parliament has recently ratified the Economic Partnership Agreement with the Southern Africa Development Community. The left rejected this. As far as the agreement with East Africa is concerned, I am the rapporteur myself, and here it will be my line of approach to observe how the East African partner countries will position themselves on the final negotiated document. In face of the present political development, the concerns in Africa have recently increased.

To what extent?
For example, the Brexit. No one can currently say how an EU exit from Great Britain will impact on trade flows, especially as many of Tanzania's goods are mainly destined to the British market and their upgrading of global value added respectively. In this context it is also unclear how the EU will position itself in terms of economic and investment policy in East Africa. The possible effects of a trade agreement on the industrial policy development of Tanzania are still unresolved up to this day. Added to this are regional aspects such as the tense internal political situation in Burundi, or the accession of politically unstable South Sudan to the East African Economic Community. The heads of East African states and government are currently talking about all these issues.

How do you see the further development?
In January 2017 there will be another summit of the East African Community.
I assume that we will hardly be able to set a new position in the Trade Committee beforehand. This means that in the interests of a mutually fair consideration of the negotiation results, we want and must wait and see how the debate in East Africa is developing; How the countries will position themselves as to the commitments they will enter when signing the trade agreement with the EU in view of their own economic and social perspectives as a regional economic bloc and in view of the expectations of their respective citizens regarding chances and opportunities of their independent economic and social development.

Further reading: Conference: The future of regional economic integration in the context of European–African trade relations

Previous article Research Report on the Management of Conflicts in Kenya-October 2017 Next article Video documentary: “Seeds of the Oil Curse”