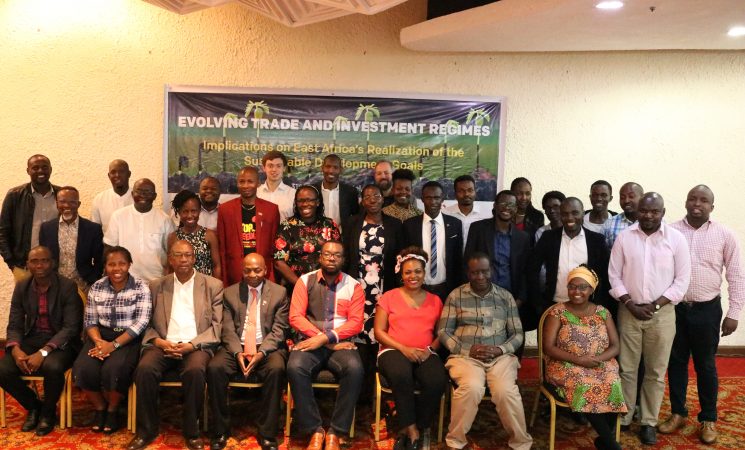 From 29th-30th May 2019 SEATINI Uganda in partnership with Diakonia Africa Economic Justice Program, Both ENDS, and Rosa Luxemburg Stiftung held a high-level stakeholder meeting on the Implications of the evolving trade and investment regime on EAC’s realization of the Sustainable Development Goals.

The purpose of this meeting was to synthesize civil society positions on three key issues pertaining to the region’s trade and investment regime. These issues include: the just entered into force Africa Continental Free Trade Area (AfCFTA); the contested Bilateral Investment Treaties (BITs) and the controversial Public Private Partnerships (PPPs).

The AfCFTA is envisaged to be an instrument for the transformation and integration of Africa’s economies driven by and meeting the needs and aspirations of all their peoples, as highlighted in the Agenda 2063. However, for this to be realized, the terms and conditions offered must be appropriate to the imperatives of the continent's structural economic transformation.

The liberalization thereunder the AfCFTA has been designed to take a one-size fits all approach. This liberalization level is not adequate to afford the necessary space and support to a wide-range of smaller and medium domestic enterprises as well as those operating in relatively more difficult circumstances which need space to develop their capacities to compete against bigger and relatively more endowed operators from other countries.

The processes involved in the design and negotiations of the AfCFTA are so far opaque and exclusive. The structures created for the AfCFTA have little or no space for the involvement of civil society, the private sector, and the different social groups and economic constituencies whose interests are implicated.  In addition, information related to the AfCFTA process, including even the timings of the meetings of the AfCFTA structures and their agenda, tend to be treated as confidential and are not readily available. Thus, the perspectives and concerns of workers, farmers, traders, domestic producers, women’s groups who have borne the brunt of trade policies of the past risk being marginalised in the AfCFTA process.

Therefore, as CSOs, we wish to propose that: the emerging focus of the AfCFTA on across the board tariff elimination and deregulation of services must be counter-balanced with more attention to industrial and other policies to build domestic productive capacity; a need to build productive capacities in the domestic economies, and to ensure that domestic producers, traders, workers, farmers, and other operators within the Africa's economies are the main beneficiaries and engines of Africa's transformation. Also, space must be created for engagement of all stakeholders- to participate effectively in a democratic and transparent process and ensure the reflection of their concerns and views in the negotiations; while Information on the AfCFTA processes must be made available in a timely and accessible manner to citizens to enable their input and effective participation at national, regional, and continental levels;

These are investment related agreements signed between two equal or unequal countries for the reciprocal encouragement, promotion and protection of investments in each other’s territories by companies based in either country. Within the EAC region, the partner states are party to a total of 37 BITs which are in force[1].

While BITs have been argued to guarantee FDI inflows for developing countries from developed countries that are in BIT, research suggests that investors do not consider BITs in making their investment decisions. An analysis of FDI flows from Netherlands to India and Indonesia showed an increase subsequent to termination of their respective BITs. Similarly in South Africa, FDI inflows from Germany also registered a progressive increase even after the former terminated its treaty with the latter.

BITs are primarily used by investors to secure their protection in the investment host state. In fact, BITs have historically been used to advance three broad policy goals: protect investors and their investments; facilitate investment entry and operation; and guarantee greater Foreign Direct Investments (FDIs) from the countries with which they have signed the BITs. It is also for these reasons that the framers of these treaties (the capital exporting countries) included, in most BITs, a provision that allow for automatic review of the BITs upon their dates of expiry without review. This is despite the fact that these BITs were initially never negotiated between the parties.

BITs are unbalanced in the sense that they focus on investor protection but not on investor obligations and they focus on the obligation of host states but not on the rights of host communities. Concerns have also been raised that BITs also restrict domestic policy space and make it extremely difficult for host states to regulate in the public interest or to harness economic growth for sustainable and inclusive development. BITs also expose the host states to significant legal risks and liabilities through the international arbitration mechanisms. In fact, some investors do what is called “treaty shopping” where they seek residence in a country merely because of the BIT it has signed to bring lawsuits against the country in question. An example is Cortec Mining which sued Kenya; and Total E&P Uganda BV which sued Uganda.

Therefore, as civil society, we wish to recommend the urgent need for the EAC partner states to each take proactive steps towards monitoring the expiry of their BITs and consider terminating them for review and renegotiation. Strong consideration should be made for utilization of the EAC model Investment treaty in informing the positions of the EAC partner states during the new negotiations.

PPPs are long‐term contractual agreements between the public and private sector for the provision of public services. Traditionally, governments have been the main providers of public goods and services, but recently, this role has been opened up to the private sector. Within the last decade, the value of PPPs in many developing countries has grown rapidly since 2004. For instance, globally, investments through PPPs increased in 2014 and in 2015 from US$104 to US$118 billion, respectively, although falling in 2016 to US$70 billion and rising again in 2017. Within the EAC alone, PPP projects are currently valued at $618 million in Rwanda, $2476 million in Kenya, $1,488 million in Uganda and $815 million in Tanzania, totaling a sum of 62 projects in the four partner states of the EAC, with the other two countries i.e. Burundi and South Sudan registering no project under the PPP arrangement.

Consequently, private investments in the health sector, education, transport infrastructure, energy generation and supply services, and water supply services, among other have grown albeit under the PPP arrangement. This change has also been witnessed in the paradigm shift in the policy and practice of international development financial institutions. While development financing institutions previously gave funding to governments to undertake development projects in their countries, the new approach promotes the more active involvement of private actors into the development process. It has resulted in the proliferation of new instruments to catalyze private investments in the pursuit of the SDGs and other global public goods.

PPPs pause various risks on the public sector including fiscal distress; indirect-contingent liabilities; limited transparency and public scrutiny; limited democratic accountability; problematic Investor State Dispute Settlement (ISDS) included in PPP contracts; limited domestic private sector involvement in PPP projects; risk of losing key national assets to the private party in a PPP arrangement; higher prices for goods and services for intended consumers; financial risk of project failure, cost overruns and delays being skewed more to the side of the contracting party or national government; escalated costs of delivering services and goods and subsequent drain of national purse as the government ends up paying much more per unit good or service under the PPP arrangement.

Previous article USING THE SUSTAINABILITY SCHOOL AS A TOOL FOR SOCIAL TRANSFORMATION: A CASE OF UGANDA'S OIL REGION Next article GERMAN MP ADVISES TANZANIA NOT TO SIGN THE TRADE AGREEMENT