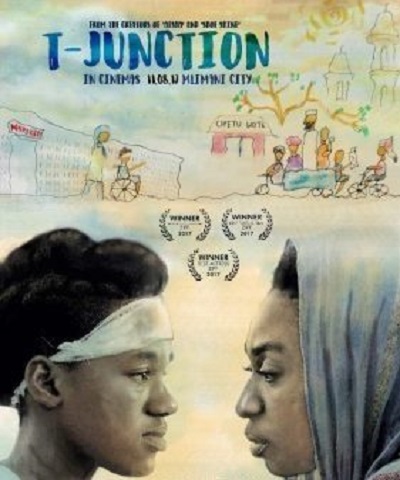 T-Junction: Psyche of the working class Indian community in Tanzania.

No culture, including that of Tanzania’s is homogenous. All cultures do have internal struggles, sites of conflict and agents of change. In T-junction we witness a social resistance to classism that is manifested in patriarchy. T-Junction is a feature-length film that offers a portrait of a community that reflects and magnifies Tanzania’s blemishes, yet still provides a picturesque landscape of living in solidarity, a symptom and outcome of an oppressive system. T-junction is a story of two girls from different ends of the city who meet at a hospital. “Minister for Justice and Constitutional Affairs Prof. Palamagamba Kabudi being interviewed by the press during the T- junction premier”. Photo credit: Amil Shivji

The film is a story of two young females and their communities. One community lacks formality but finds comfort in solidarity while the other lacks life but adheres to the structures of society. Fatima is a mixed Indian-African young adult who has just lost her estranged father to alcohol. She is unable to mourn his death because of the lack of presence he offered while he was alive. An invisible separation always existed between them. Her mother on the other hand does all she can to mourn as loyal wife should and condemns her daughter’s insolence towards the dead.

Fatima has to make simultaneous trips to the hospital to ensure her mother gets the death certificate, a task that bewilders her since her father left no possessions of value for the family. At the hospital, power failures cause her to spend more time than intended and she makes an unlikely companion at the disease-ridden benches. Maria who is a patient at the hospital is about the same age as Fatima but their personalities are polar opposite. She sits on the benches whiling away her time by spying on the staff and twirling in her hospital gown while trying to capture the fluorescent rays from the tube lights in her palms. All this whilst being bundled up in blood clotted bandages across her head and arms. “Minister for Information, Culture, Arts and Sports Dr Harrison Mwakyembe (right) having a chat with Prof. Issa Shivji (centre) and other invited guests at the occasion of the T- junction premier” 2017. Photo credit: Amil Shivji

Maria agrees to tell Fatima how she fell upon such disaster on one condition; she has to listen to the entire story. Knowing electricity won’t be coming back anytime soon, Fatima adheres. Then begins the tale of the T-junction. Through Maria’s great orating skills, Fatima meets Chine, Shabani, Arbogast, Mama Maria, Mangi, Bhabhi and many others who spend their time and make a living around the T-junction. In Maria’s story, Fatima finds love and rage, joy and sorrow, solace and loneliness. But the story never finishes and when Fatima goes home she finds her grieving mother who refuses to reconcile with the passing of her husband. Fatima cannot comprehend how her mother can mourn for a man who was barely present. In her impulsive insolence do we see how solitude engulfed Fatima’s life and attachment was never an option for her. Fatima returns to hear the rest of Maria’s story under the guise of obtaining the death certificate. Their relationship strengthens over the three days as they travel over peaks and valleys in Maria’s story. Maria resuscitates life in Fatima’s mundane life through her tale as Fatima becomes part of the T-Junction.

In this film, Maria’s ragtag community is finally offered a space to voice their qualms during a period where the government has called for ‘cleaner streets’ by destroying kiosks on the side of the road and demolishing makeshift stores that are suddenly deemed illegal. Their livelihoods are cast down and broken yet they find comfort in their solidarity. A familiar feeling to our other protagonist, Fatima who is supposed to mourn the loss of her estranged drunkard father yet cannot get herself to shed a tear but instead finds solace in her joint-loneliness with Maria as they sit together at the hospital and blossom in their woes. T-Junction tells many entangled stories and not a single one. No community can have a single story.

This film is also the director’s chosen means of digging into the psyche of the working class Indian community that has integrated with the local communities over generations to a point where intermarriages are not rare in those spaces. It is meant to tell African stories from the continent; stories that are either unheard of, only whispered about and/or are told from ‘a single story’. To tell a story from one angle is impossible, thus the producer’s choice to have a range of characters in the film that represent the racial and class structure of the city of Dar es Salaam. Female characters are placed at the centre of the frame to take control of their stories by literally orating and steering them into motion.

T-Junction had its premiere at the Zanzibar International Film Festival (ZIFF) 2017 where it opened the festival week and went on to win three awards for Best Bongo Movie, Best Actress and European African Film Award.