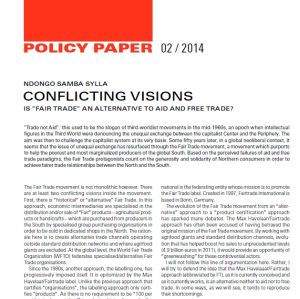 “Trade not Aid”: this used to be the slogan of third-worldist movements in the mid-1960s, an epoch when intellectual figures in the Third World were denouncing the unequal exchange between the capitalist Center and the Periphery. The aim was then to challenge the capitalist system at its very basis. Some fifty years later, in a global neoliberal context, it seems that the issue of unequal exchange has resurfaced through the Fair Trade movement, a movement which purports to help the poorest and most marginalized producers of the global South. Based on the perceived failures of aid and free trade paradigms, the Fair Trade protagonists count on the generosity and solidarity of Northern consumers in order to achieve fairer trade relationships between the North and the South.