Dialogue: Searching for the way: 50 Years after the Arusha Declaration 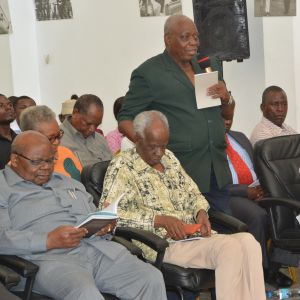 Standing in remembrance of Mwl. Nyerere

The Arusha declaration on Ujamaa and Self-Reliance in Tanzania  is again interpreted as a real, viable option for social, political and economic development - and more than just a theory. The Nyerere Resource Centre (NRC), which has as one its mandate to document Nyerere and organize debates around his work, life and philosophy, on February 22nd 2017, organized a lively National Debate on 50 years after “Azimio la Arusha” (the Arusha Declaration of Socialism and Self Reliance).

Speakers and participants, who were a mixture of generations, one being the “Azimio generation” (those who were there during the time of establishing and implementing the declaration) and the other being the “post-Azimio generation” all immersed themselves in digging deep into contextualizing and understanding the Azimio, while not shying away in showing their support or criticism of it.

The inter-generational discussion was opened on the basis of the key notes delivered by Prof. Ahmed Mohiddin of Makerere University in Uganda and Hon. Fortunatus L. Masha, former Publicity Secretary of the Tanganyika African National Union (TANU) at the time of making the Arusha Declaration in 1967  and former Member of Parliament of the East African Legislative Assembly (EALA). Following discussions from lest seating

They both pictured vital historical and philosophical insights on the background to the declaration, key persons behind the declaration, how the declaration helped to shape the socio-economic and political landscape in Tanzania and how eventually the challenges in its implementation later on led to economic hardships both to the people and the country in general.

Views in support or otherwise were divided among the participants – regardless of the generation to which they belong. While some, on one side, still view the declaration as being a wrong move especially economically and politically; others still view it as an important tool for the nation, a tool that still needs reviving even now, for implementation.

Arguments against the declaration usually base on its economic failure. But the policy had more to it than just the economic and business. It established social, political and ethical principles for the nation – especially for those in public office. It had a set of ethical principles, an obligatory oath for all people taking public on their commitment to hate and fight corruption in all its forms and on never using public office for personal gains. It further barred public officials from engaging in privately income-generating business to curb conflicts of interest and limit chances for abuse of public office.

Proponents of the Azimio further reiterated that the nation needs to develop and have an ideology on which to run – which clearly seems not to be the case today, where one of the key elements that lacks in the running of government today is a strict code of ethics for public servants. This, among other things, would ensure – at least to a large extent – alleviation of the possibility of conflicts of interest and abuse of office – especially on issues related to business and income generating activities concerning public office.  Abuse of public office, disregard of laws and regulations were said to be so much characterising the current regime in the country.

Despite the fact that the topic seemed to be on “history” – which traditionally attracts old citizens and academicians, this event was surprisingly very well attended by the youth, young adults and women.

All participants commended the organizers (NRC) for organizing such one-of-a-kind event in Tanzania, especially to discuss such a traditionally-sensitive topic publicly – on whether the Arusha Declaration is still applied or has been burnt. The event also included exhibition of rare documents and photos (including media – audio and print clippings) related to the history of Mwalimu Nyerere and the Arusha Declaration itself.

Background information: The Arusha Declaration was a declaration made in 1967 by the then ruling party in Tanganyika (Tanzania Mainland), TANU, that at the core of it, introduced a form of “Socialism” – a term which somehow (though not directly) translates from Ujamaa. It was then followed by Nationalization of Private properties including banks, factories and other major means of production and putting them into public hands. The declaration was literally abandoned in the late 1980s after prolonged economic hardship in the country in favour of more liberal policies – primarily under the pressure from the World Bank and IMF.