The heritage of Mwalimu: Launch of the Nyerere Resource Centre 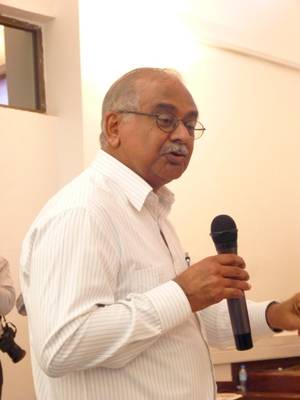 Prof. Issa Shivji, Director of the NRC (Photo: A. Bohne)

Speaking at the opening ceremony, Professor Issa Shivji, the Director of the centre noted that the body is in a process of conducting research to write a definitive biography of Julius Kambarage Nyerere. He added that for the last three years, researchers have done a substantial amount of study and that the drafting of the biography had begun pointing out that all documents will now be accessible at the centre for further research.

Prof. Shivji emphasized that the NRC will in its mandate also provide a platform for intellectual dialogues, discussions and provide training courses for activists and academics centered on the ideals of Mwalimu Julius Nyerere. He further expressed gratitude to the Rosa Luxemburg Stiftung for their support in establishing the NRC.

The first lecture of what will be known as the “Nyerere Lectures” was delivered at the launch by Prof. Adebayo Olukoshi, Director of the African Institute for Economic Development and Planning in Dakar with a call to the return of the developmental state. The launch was accompanied by a photo exhibition portraying the political life of Julius Nyerere which attracted hundreds of people to the two day ceremony.

Audiofiles:
Mhe. Benjamin William Mkapa, the former president of Tanzania, launches the NYERERE RESOURCE CENTRE at COSTECH, at the end of the song specially composed and sung by CAROLA KINASHA and MAWILE MAEMBE. Mhe Mzee Cleopa Msuya, for mer prime minister of Tanzania, in conversation with Professor Samuel Wangwe and Professor Issa Shivji on 'Dira ya Maedeleo" (Day 1)