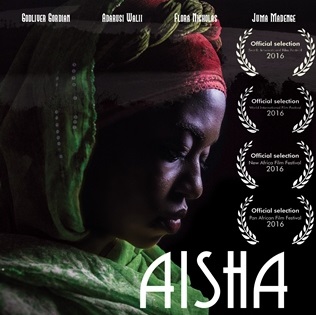 After a successful tour of three cities in Germany in April 2015, Tanzanian film maker Amil Shivji, Director of Kijiweni Productions, is going back with the feature film Aisha that was made in collaboration with Uzikwasa, a Pangani based NGO.

“Aisha” is currently visiting different festivals and picking up awards on the way including the recent big scoop at the Zanzibar International Film Festival 2016 and Audience Prize at the International Images of Women Festival in Zimbabwe. The Rosa Luxemburg Foundation, with which we have worked with before, has found it important to provide the film a more engaging platform in Germany by supporting and organizing screenings in Berlin and Cologne in collaboration with Film-initiative Cologne and AfricAvenir.

The film story: Aisha, a young ambitious business woman living in the city returns to her home village to attend her younger sister’s wedding. As she re-connects with her past, meeting family and friends, the unexpected happens that has disastrous consequences for her life.  Everyone else would rather turn a blind eye, but Aisha decides to fight a tough battle for justice.

The film will be screened in Kiswahili with English subtitles. The producer of the film, Amil Shivji will be present for each screening that will be followed by an audience discussion.

Previous article Film: Seeds of Freedom Tanzania Next article Conference: The future of regional economic integration in the context of European–African trade relations